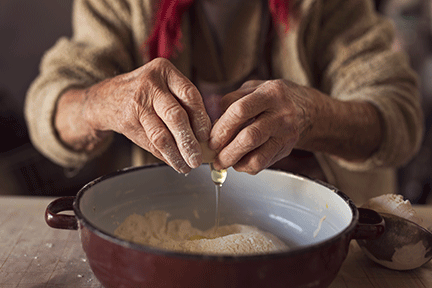 Some people are not destined for happiness,

and I may be one of them.

You see, in certain parts of the world where

I have been and now live,

at least in my dreams, happiness is only

granted to a woman

who leaves a dish of mashed peas out in

But superstition does not name what moon

phase or if one must

eat the peas. Instructions too vague.

No happiness yet. I'd ask my Nana if she

but she was the one who gauged oven heat

with a bent elbow

and said happiness was to bake a cake

First published in The Southern Review, 2018

In chalk on the black door, someone has drawn
the world yet to come. A child—androgynous,

with a tangle of ink-dark hair—is taking that
future, using both hands to smudge it, to blur

the clouds, the ascension. Now chalk in hand,
he/she, in Oshkosh overalls and Keds, short legs

splayed, is screeching out a new vision. Here,
there are gateless fences to trap and imprison,

angry scribbles and, below, lines that might be
grass but are, instead, fire, conflagration.

We can't see the child's face, but when someone
bullies through the shut door his/her face will

be licked and crazed by the silent white flames

MEMO TO A FORMER CHILD PRODIGY

by the age of nine

duplicate bridge
so what

was left to do

This poem also appeared in the Denver Quarterly 2014;