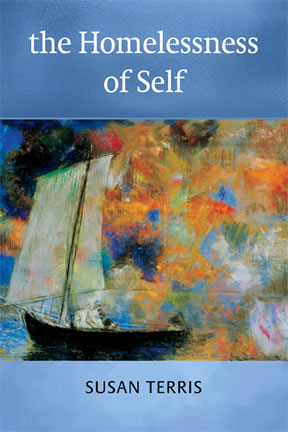 All dreams lead back to the nightmare garden.
– Janet Frame

In the airport, she sees women and men,
laminated identities swinging across their chests;
and the shop offers fcuk, a fragrance
with the line: Scent to Bed. The inversion
of letters is where it began or how, with one replaced,
saint became slant. Mother no longer tucked beside
Father into the dollhouse bed in the room with
a missing wall. No more clues. This murder was not
done with a candlestick in the dining room but
slowly, room by three-walled room, in a cheerful
round of miniature days lit by a triple A battery.

Is her biography fiction, people ask,
or her fiction biography? Not too different from
that sassy confessional poet who reportedly
writes ten minutes behind her life.

Once the doorbell rang. Once the window boxes
held flowers, and a porcelain cat crouched
in the front yard shrubs. But Goodwill has taken
much away, including Father in his quilted bed.
Today, a parade of seething nights,
dusty paths lead to a shrine of feathers, snake
and grass and silent claws. Now rooms here
have no light, and another wall has gone missing.
Time for the market cart,
green plastic bags, and a shit-stained blanket?
Do not attempt to reconstruct the truth.

If you think this is about drink or sex, you will be
both wrong and right. To orient yourself, trail
fingers of your left hand along the surface of
your two remaining walls. If you lose them,
the garden will grow, or you, like Alice, will shrink
until you can't reach high enough to smell
the reckless peonies or take the key waiting
atop the table. So what does it mean then to love
and be loved? Is it worth the risk?

The dollhouse was such a safe haven. Miniatures
may give the illusion of control, yet control has
vanished with the walls. She's left now with
feathered trails, highways, skylanes — lines of
uncertainty arrowing off in all directions.
She's lost because of sex. She's won because
of sex. She will drink to that, to an unsafe
snake-scented garden where she might wander
naked and unashamed. The slant is not quite
right, but she continues to plane it down.
The game, she insists, willing to discard batteries
yet not the candlestick, is riotous and disordered,
scent of bed in the air. But nightmare or not, it is
after all, worth each and every candle.

"Sometimes safety is unbearable," declares one of these sharp, and sharpened, poems—it's a theme that informs the whole collection, as its many voices, all equally sure, equally exacting and precise, take stock of the real situation of the women Terris sees around her. In her intimate social examination, Terris also does something entirely new with the confessional poem, opening it to previously unexplored territory with her vivid, idiosyncratic language and hauntingly honest imagery. The whole is eye-opening and refreshingly frank.